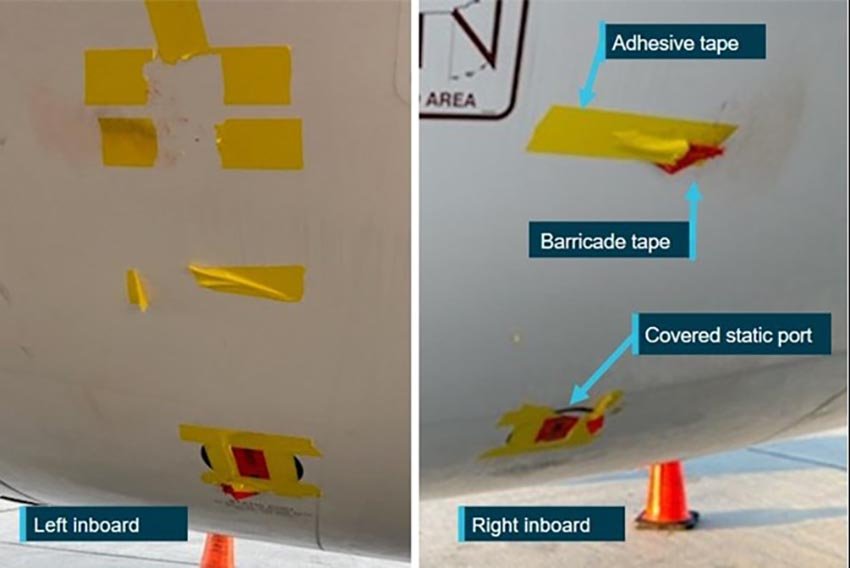 A Boeing 787 being used for a freight flight flew from Melbourne to Los Angeles with tape over four of its static ports, a new ATSB investigation report details.

After the Qantas 787-9 aircraft, registered VH-ZNJ, landed in Los Angeles on the morning of 22 September 2021, a Qantas engineer found tape covering the four static ports on the aircraft’s engine fan cowls.

Static ports provide important air pressure data to aircraft systems. Boeing recommends they be covered, to avoid contamination, when the aircraft is parked for periods up to 7 days, and Qantas incorporated this instruction into its ‘normal’ parking procedure.

The ATSB investigation details that on the day before the incident flight, an engineer undertook the parking procedure on the aircraft, which included covering the engine cowl static ports with ‘remove before flight’ barricade streamer tape.

“Later that day, another engineer was tasked to conduct the ‘restore’ procedure to return the aircraft to flight status,” ATSB Director Transport Safety Stuart Macleod explained.

“The tape on the engine fan cowls was not removed by that engineer, as per the manufacturer’s procedures, and this wasn’t identified by flight crew or dispatch during pre-departure checks.”

VH-ZNJ subsequently took off with the tape still on its engine fan cowl static ports.

“While the flight was uneventful, the covered ports meant redundancy for the engine electronic control system was reduced,” Mr Macleod noted.

The ATSB found that while the job instruction card (JIC) developed by Qantas for parking a 787 did link to Boeing’s recommended procedures, the JIC for restoring it back to service did not.

“This was a missed opportunity to assist engineers to readily access the current procedures and determine which ports were covered, and also allowed for different interpretations of which ports could be covered,” Mr Macleod said.

“When performing safety‑critical tasks like aircraft maintenance, it is very important that procedures are clear and unambiguous to avoid misinterpretation and error such as occurred in this incident.”

At interview, the flight crew’s second officer, who conducted an exterior inspection of VH-ZNJ before the flight, reported they were aware of the fan cowl ports, but not that they could be covered by tape.

The second officer also reported they were somewhat distracted during the inspection, as they had found a pitot tube cover on the ground, and were trying to hand it off to an engineering staff member at that time.

“The second officer also believed Qantas engineering had conducted a pre-flight inspection prior to the flight crew arriving at the aircraft,” Mr Macleod added.

Following the occurrence, Qantas distributed memos to engineering, and flight and ramp crew, highlighting the location of the fan cowl static ports and that they may be covered.

In addition, the airline amended its ‘park’ and ‘restore’ engineering instructions to both reference Boeing’s procedures.

The investigation report also notes the metre-long tail of the ‘remove before flight’ tape covering the static ports was stuck down, to prevent it being torn from the fuselage in strong winds, as per Boeing’s recommended procedure.

“Targeted inspection of locations and components, rather than relying on streamers, which can detach, can help to identify when these covers or devices have not been removed.”